Lawh-i Fitnah (The Tablet of the Test -Tribulation - Enchantment).

The Tablet of the Test-Trial-Tribulation-Enchantment.

The Lawh-i Fitnah (The Tablet of the Test),

Baha'i sources have it that the Arabic scriptural Tablet known as the Lawh-i Fitnih or Fitnah was addressed to a grand-daughter (there were almost 300) of the many, hundreds of  times "married" (he had four official wives and many hundreds of female associates) Qajar ruler Fath `Ali Shah (Shah, 1797- 24th Oct. 1834 CE). Aside from having the pen-name Fitnah ( or Fitnih = Temptress, Seductress, Rebellious, Calamatous, Enchantress, etc). she  who was known as Shams-i Jihan  (The Sun of the world) Khanum. She was a Qajar princess and an aunt of the notorious Qajar ruler Nasir al-Din Shah (d. 1896 CE)..

Shams- Jihan, Fitnah was apparently a close associate  of Fatimah Baraghani (d. 1852 CE), a daughter of the Qazvini cleric Muhammad Salih Baraghani ( b. Baraghan c. 1200/1785  or  1167/1753 or 1174/1760 - d. Karbala, [now in Iraq] 1271/ March 17th, 1855 CE) and Amina Salihi Qazvini (d. 18XX). The father was an Usuli Shi`i Mujtahid who  around 1817, founded the important and massive Ṣalihiyya madrasah in Qazvin. His Shi`i-Shaykhi daughter Fatimah, who was taught in this Madrasa and herself taught there, became a  fervent Babi from the outset in 1260/1844 proclamation of this new Babi religion. In Shaykhi and Babi-Baha'i circles she came to be entitled Tahirah (the Pure One) and Qurrat al-`Ayn (Solace of the Eyes).

As a Babi Tahirah came into contact with this grand-daughter the abovementioned second Qajar Shah known as Shams-i Jihan and Fitnah. She also met Baha'u'llah during the early days of his residence in Baghdad (from 1853-1863). The Lawh-i Fitnah and other scriptural Tablets (alwah) were written for her by Baha'u'llah. The Lawh-i Fitnah is centered upon the eschatological realizations of the latter-day Fitnah which can be translated "Test", "Trial",  "Tribulation"  and in many other ways also. It can also be translated in ways suggestive of allurement or "enchantment". It opening theological address and commencement  such as a  huwa (:He is") or a neo-basmala seem not to be present or to have disappeared from the extant mss. Assuming that the opening address --  يا فتنة البقاء   --    O Fitnah al-Baqā' is to the grand-daughter it might be translated something like "O Eternal Enchantment!" rather than after its the heavy eschatological meaning evident in many of the succeeding lines. In this text Baha'u'llah personifies himself as the end-time Fitnah, the Test, Tribulation or

Mss. and printed editions of the original Arabic text.

Lawh-i Fitna (The Tablet of the Test). Translation.

This roughly seven page scriptural Tablet opens as follows - though preliminaries or such commencements as a neo-basmala seem absent in the several mss. I have seen.

The commencement of the Lawh-i Fitnah from the ms. INBMC 81:76-80;  the bracketed line above the main text is not part of this Tablet. it would be unusual to simply commence with the  address ان يا فتنة البقاء 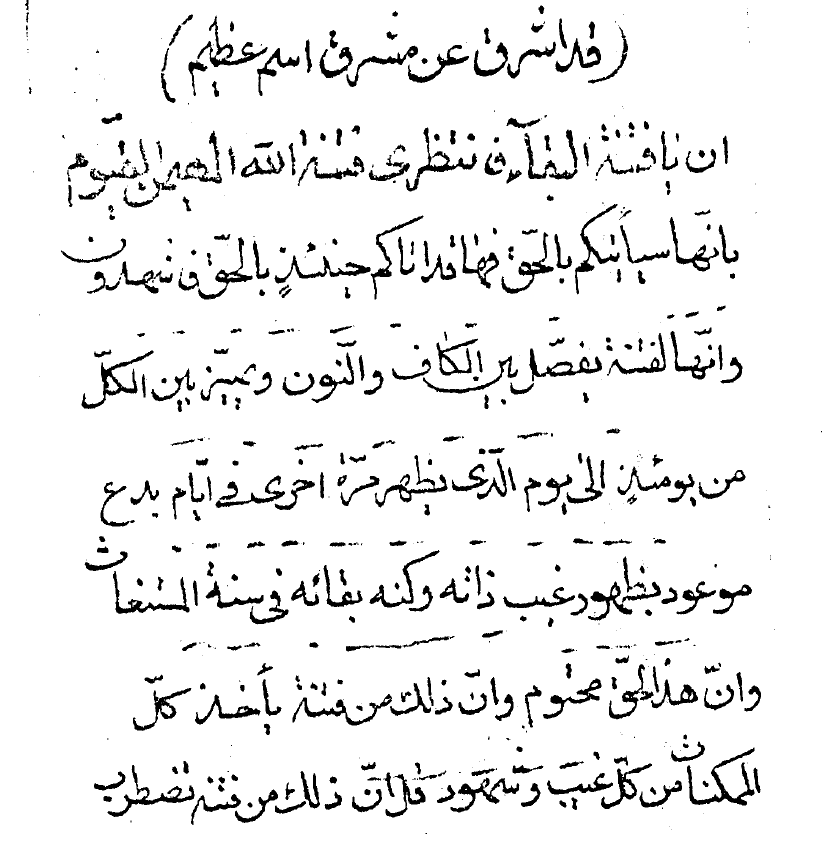 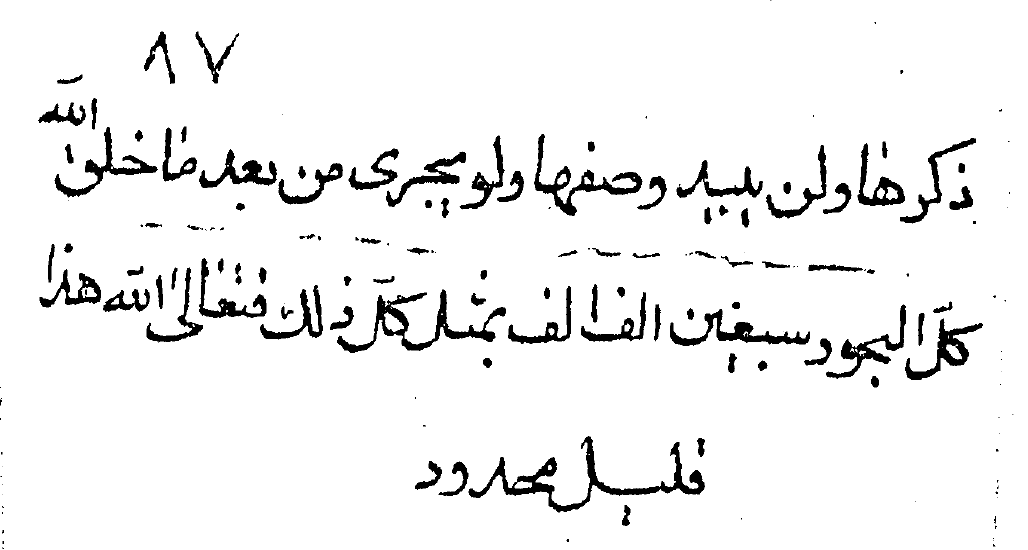 " So Exalted be God! Hence, this is but a limited amount (qalil mahdud)"

Some Notes on the word Arabic-Persian word Fitnah

Fitnah in the Qur'an

The Oxford Dictionary of Islam inclides the entry "Fitnah" as follows :

"Trial or testing, temptation; by extension, treachery, persecution, seduction, enchantment, or disorder resulting from these things. A hadith states that the greatest fitnah for men is women. Though the term fitnah is generally negative, a girl may be named Fatin or Fitnah in the hope she will not be a seductress and in recognition of her beauty. In modern political terminology, allegation of fitnah can be used to discredit the actions of opponents. The first Muslims to write about the French revolution (1789) identified it as fitnah" .See online at "Fitnah - Oxford Reference".